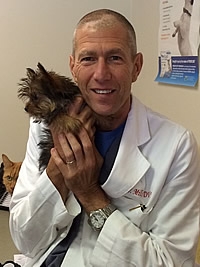 Dr. Charles Miller has always had others’ interests at heart—before becoming a veterinarian, he worked as a registered respiratory care practitioner for 13 years, specializing in neonatal and pediatric critical care. When he began contemplating a career change, it only made sense to combine his love of medicine with his lifelong adoration of animals. Veterinary medicine was the perfect choice! Now, Dr. Miller has been serving the pets and animal owners of the area for nearly 28 years.

Dr. Miller grew up in Virginia Beach, Virginia before moving to Durham with his mother and two sisters. He first joined the Triangle Veterinary Hospital team as an undergraduate student in the late 1980s, using the real-world experience he gained here to prepare himself for veterinary school. Next, Dr. Miller attended North Carolina State University’s College of Veterinary Medicine to earn his Doctorate. Shortly after graduating in 1992, he joined the Triangle Veterinary Hospital family as a licensed veterinarian and became the practice owner four short years later.

Medically, Dr. Miller is interested in orthopedic, soft-tissue, and laparoscopic surgeries, internal medicine, oncology, and endoscopy. He also likes staying current on the constant advancements in veterinary healthcare and passing this knowledge on to his clients. Most of all, Dr. Miller enjoys interacting directly with his patients and their owners on a daily basis.

Dr. Miller is an avid runner, cyclist, gardener, and car and motorcycle aficionado. He enjoys decorating his new home and spending time with his puppy Magic and a new kitten named Kobe. 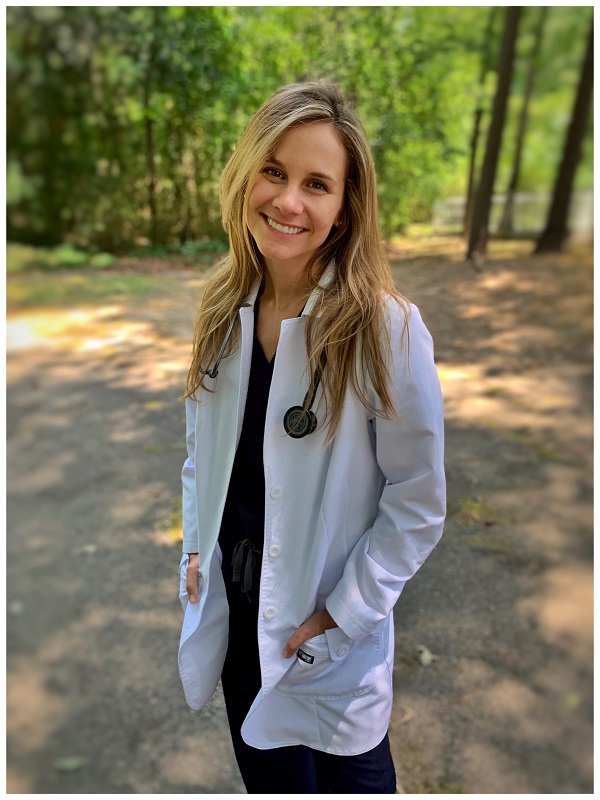 Dr. Jessie Watson is a Doctor of Veterinary Medicine that joined Triangle Veterinary Hospital in 2019.

Dr. Watson grew up in a small town in Wisconsin and moved to North Carolina as a child. Upon graduating high school in Greensboro, NC, she pursued her undergraduate studies at the University of Hawaii at Hilo where she studied agriculture and animal science. While living on the Big Island of Hawaii she gained a passion for economically sound, minimalist living and spent 3 years living off-the-grid. Her favorite homes included a treehouse in a 100-year-old mango tree, living on a cattle ranch and residing in a 144 square foot home. In her free time, she enjoyed sailing, surfing, gardening, and raising free-range chickens and show rabbits.

Dr. Watson moved back to North Carolina in 2012 to be closer to family and pursue her veterinary education. She completed her doctorate in veterinary medicine from NC State University. Her clinical interests include feline medicine, dentistry and pain management.

While not at work, Dr. Watson continues to enjoy outdoor activities with friends and family, traveling and cooking. She shares her home with her beloved ragdoll cat named Lana. She is planning on expanding her pet family soon and hopes to have a small farm in the future. 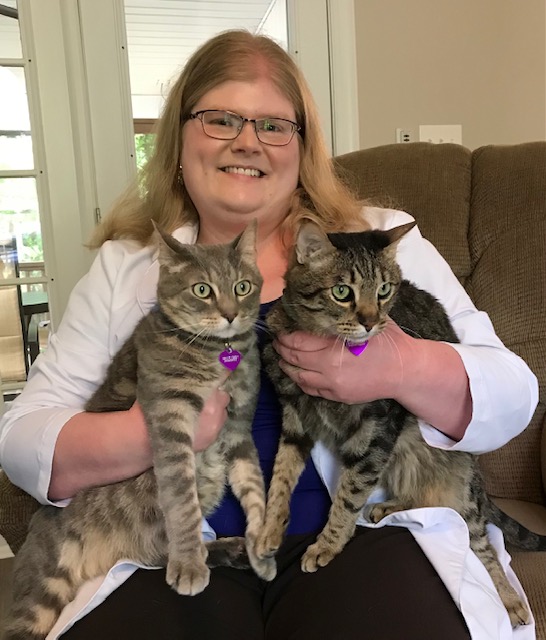 Dr. Ashley Pooch’s life has always involved animals. She grew up in Wilmington and spent her childhood trying to befriend the stray kittens in her neighborhood and attempting to teach her family’s stubborn Heeler mix to jump over homemade obstacles with the hope that someday he would be an agility champion. It’s only natural she wanted to be a small animal veterinarian for as long as she can remember!

Dr. Pooch got her bachelor’s degree in zoology with a pre-veterinary concentration from Auburn University (War Eagle!). While there, she gained experience with a wide variety of creatures by volunteering at the humane society, Southeastern Raptor Center, and the Auburn vet school’s Equine Reproduction Unit. During her undergraduate years, she spent a summer studying abroad at the Royal School of Veterinary Studies in Edinburgh, Scotland. From there, Dr. Pooch went on to obtain her doctorate of veterinary medicine from the University of California, Davis School of Veterinary Medicine in 2018. Her clinical year included externships at a cat-only clinic in Sacramento, a small animal general practice in Kailua, O’ahu, and the Guide Dogs for the Blind campus in San Rafael. Her clinical interests include feline medicine, behavior, and dermatology. She also loves interacting with and building lasting relationships with her clients.
Dr. Pooch lives in North Raleigh with her two extremely snuggly cats, Siegfried and Tristan. Her hobbies include swing dancing, writing, reading, cooking, baking, running, triking (like biking, but with one extra wheel!), exploring the Triangle, and traveling. She is very proud of her younger sister, who is a veterinary student at the Royal School of Veterinary Studies in Edinburgh, Scotland! 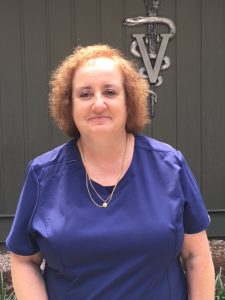 Originally from Europe, Lorena first came to the United States 35 years ago to help her husband manage an American Paint Horse ranch in northern Durham. Through plenty of hard work and dedication, Lorena came to adore the devotion and love that she received from the animals she cared for. She’s known that pet care was her true calling ever since!

Lorena was born in Padova, Italy and also spent time in Germany as a child after her parents moved there. In addition to English and Italian, she also speaks German and even a bit of French!

Lorena first joined the Triangle Veterinary Hospital team in 2004 after being referred here by a friend and client. She serves as the Hospital Manager, and her favorite part of the work is getting to see happy, healthy pets be returned to their loving and appreciative owners.

Lorena and her husband, Charles, live in Haw River. They have two grown sons, Franco and Marco. 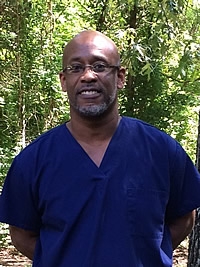 For Reggie, caring for animals isn’t just a hobby, or even a career. It’s something that brings joy to his heart on a daily basis—he simply can’t imagine doing anything else! Reggie has been caring for the area’s pets here at Triangle Veterinary Hospital for 18 years.

A Durham native, Reggie first entered the human healthcare field after high school, serving as a nursing assistant in various retirement homes. It didn’t take him long, though, to realize that something was missing. That something was animals! Reggie joined the Triangle Veterinary Hospital family in the fall of 1998, and has been here ever since.

Reggie has been married to his wife, Monica, for over 20 years. The couple has four sons, two of whom have followed in their father’s footsteps and entered the veterinary field themselves. Reggie and his family share their home with a dog named Dakota.